In this post I'd like to discuss Nicholas Ackley. I suspect that much of the information in this post may be old news to many of you, but I wanted to stick to things that are verifiable to a degree from reliable sources. I have thrown in a family legend or two (which I have identified as such) that I'm hoping we can work together on to verify or refute. My reasoning for this approach is that I have seen more than enough unsupported genealogy on the internet, so I wanted to make sure I didn't add to the mess by posting information I couldn't support.

Nicholas Ackley is generally recognized as the first Ackley to arrive in America, and certainly a large number of Ackleys living today are his descendants. Fun fact: in the 2000 census (the most recent data I could find) there were 6,895 people with the Ackley surname; Ackley ranked 4,702 out of 151,671 surnames reported with at least 100 occurrences in that census1. Contrast that with Smith, the most frequently occurring surname, which had 2,376,206 occurrences.

My line of descent from Nicholas is:

Nicholas is widely reported to have been born around 1635 in Shalford, Essex, England. In this day and age of information proliferation on the internet, this date and location appears all over the place, but I have yet to find any source citation to back this information up. In my opinion, the details of Nicholas’ birth are still an open question. A couple of years ago I located the local church in Shalford and found out that they were working on transcribing the church records for the parish. I contacted them and they said they would contact me when they were finished, but I never heard back from them and I never followed up. I will add this to my ever growing to-do list.

Although it is not known for sure when Nicholas arrived in America, there is speculation that he was here as early as 1649. According to Dawes-Gates Ancestral Lines: A Memorial Volume Containing the American Ancestry of Mary Beman (Gates) Dawes Vol. II, “Nicholas was of Hartford, Connecticut, probably as early as 1649…”2, although no evidence is offered as to why this date might be correct. In a footnote, the same reference speculates that “Nicholas was possibly one of several men and youths brought over by William Wadsworth. The latter is supposed to have reared and employed Daniel Brainerd, who later became a fellow-pioneer at Haddam with Nicholas.”2 (Wadsworth was one of the original proprietors of Hartford, having moved there from Massachusetts in 1636.) I have also been told that Nicholas came as an indentured servant and that he was freed from his indenture at age 16, but I have not been able to find any evidence to support that assertion (so at this point I would consider this a family legend that still needs some kind of proof). Another part of this legend is that Nicholas was sent to America by his father to escape the English Civil War, which took place between 1642 and 1651. The indentured servant story would not be surprising, as it is estimated that “Over half of all European immigrants to Colonial America during the 17th and 18th centuries arrived as indentured servants.”11 Fun fact: The Census Bureau estimates that the population of Connecticut in 1650, about the time that Nicholas came, was about 6,000. The total estimated population of the colonies at that time was 51,700.12

The earliest date for which I could find written evidence that Nicholas was in Hartford is 1653. According to History of Northampton Massachusetts from its Settlement in 1654, he is listed as one of the original petitioners, many of whom were from Hartford, who signed a petition in May, 1653 seeking to establish a plantation at Nonotuck, Massachusetts (present-day Northampton; about 45 miles north of Hartford)3: 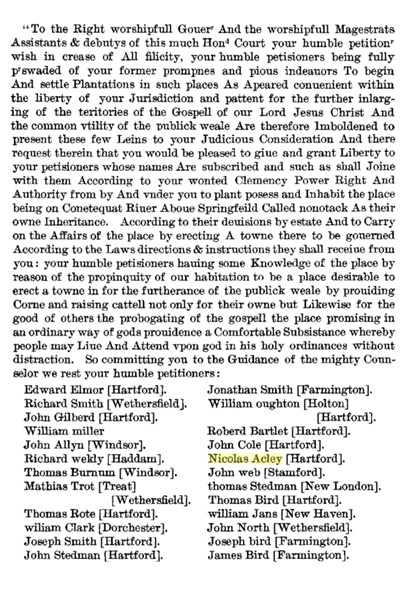 There is no evidence that Nicholas ever settled in Nonotuck; as discussed below, records show that he was living in Hartford in 1655 and beyond.

Nicholas was surely living in Hartford by 1655, as evidenced by the appearance of his name on the list of inhabitants who paid to have grain milled at the community mill in 1655, 1656, and 16572. He also is shown to have owned land in Hartford, specifically lot 42 on Trumbull Street, in 16552. By 1662 Nicholas was listed as the chimney viewer in Hartford4. The duties of a chimney viewer were similar to a fire marshal – Nicholas was expected to inspect the chimneys of the town and ensure they were clean and in good working order to prevent fires2. The map below from page 613 of Dawes-Gates Ancestral Lines2 shows Hartford in 1640. The lot that Nicholas would own ten years later is highlighted in yellow. Note that it is adjacent to the lot owned by William Wadsworth, mentioned above. 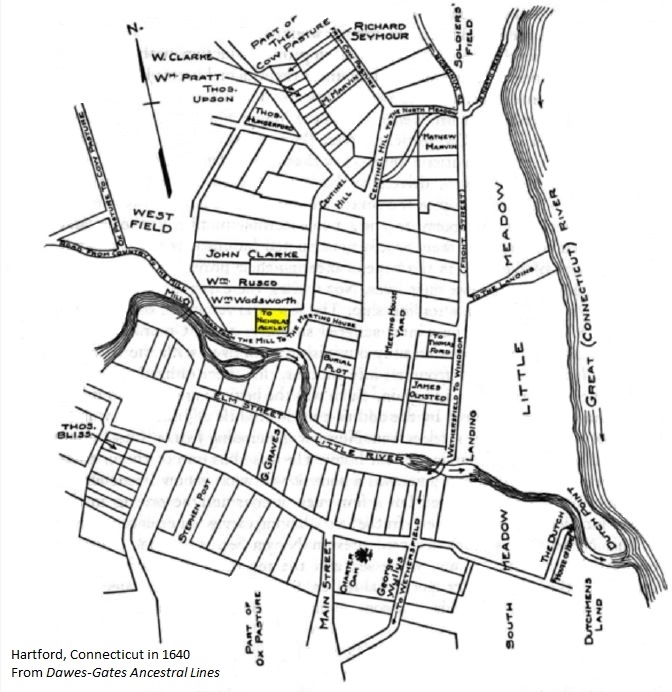 It is well documented that Nicholas was one of the original proprietors of Haddam, Connecticut. Nicholas is listed among the 28 young men who purchased land in what would become Haddam in 1662 according to Historic Towns of the Connecticut River Valley by George S. Roberts5: 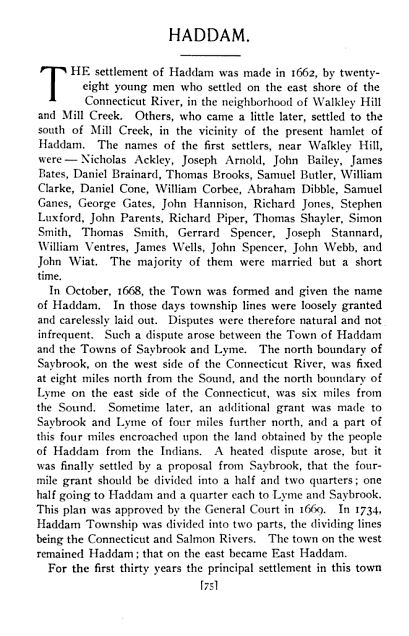 This group of men is also honored with a plaque displayed in downtown Haddam: 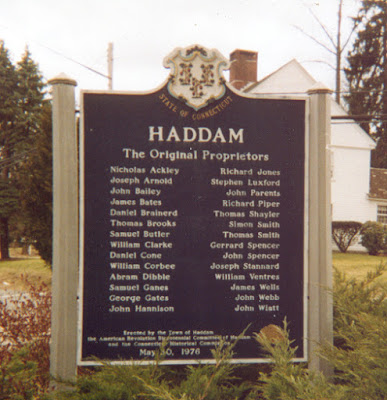 The town was established on the Connecticut River. The main part of the town was set up near Haddam Island, also known as Thirty Mile Island. Another group settled about a mile southeast in an area known as the Lower Plantation. A map of the original settlement compiled by Richard M. Bayles in History of Middlesex County, Connecticut can be seen below6. Note that the map is actually two maps laid out side by side on the same page. The map on the left is the layout of the Lower Plantation, while the map on the right is the original town plot. You can see that Nicholas had two lots in the lower part of the Lower Plantation; an 8-acre lot and a 5-acre lot right next to it. 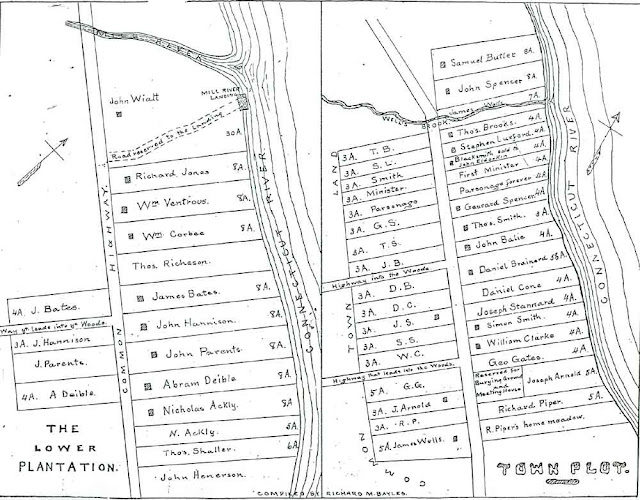 Apparently Nicholas was slow to join his fellow proprietors in Haddam, which prompted them to seek his promise to make the move. From Memoranda Relating to the Ancestry and Family of Sophia Fidelia Hall we find this pledge from Nicholas to settle at Haddam7:

Nicholas was married twice. His first wife was Hannah Ford Mitchell. They were married about 1656 in the United States8. Hannah is the mother of all of Nicholas’ children; they were listed in probate records as Thomas, Nathaniel, John, Samuel, James, Elizabeth, Hanna, Mary, Sarah, and Lydia9. I will discuss the children in greater detail in a subsequent post. Also mentioned in probate records was Nicholas’ second wife, Miriam. Miriam’s surname is given as Moore (without a good source) all over the internet, but a note in Dawes-Gates Ancestral Lines disputes that: “Sometimes surmised to have been Miriam Moore (Miles), but that can not be true, for she married first John Willey, and married secondly, 1689, Samuel Spencer (Gerrard) and became his widow in 1705.”2

One fact that we don’t have to guess about is the date and location of Nicholas’ death. As mentioned above, there is a record of his probate in the Hartford district of Connecticut. He died on 29 Apr 1695 in Haddam, Connecticut. Here is a summary of this record from Charles William Manwaring’s A Digest of the Early Connecticut Probate Records 1635-1700 Vol. I9: 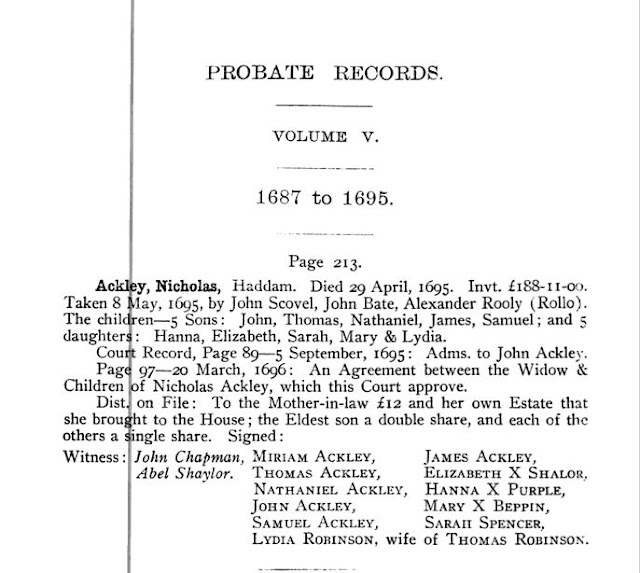 The original handwritten copy of this record can be found on Ancestry.com in their Connecticut, Wills and Probate Records, 1609-1999 record collection10.

The link below is for Dawes-Gates Ancestral Lines referenced throughout this post (it will take a while to load – it is a very large document). This link is from the Family Search website. If you are interested in Nicholas Ackley I highly recommend this book. There are two pages of references at the end of the Ackley section that I have found very useful. It was originally published in 1931 but appears to have been reprinted in 1991. If you can’t click on the link below, cut and paste it into your browser.

"It’s what you learn after you know it all that counts. "
--John Wooden