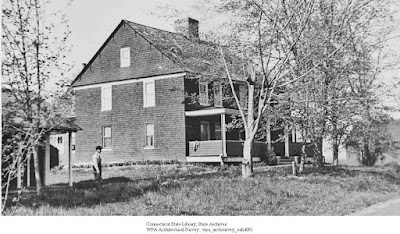 According to the Connecticut State Library, (the source for the picture above, taken around 1935), the original owner of the house was Nathaniel Ackley. The house is in East Haddam, Connecticut, and on the chimney there is an inscription that says N.A. 1764 [1]. The question is, which Nathaniel Ackley did it belong to?


As we learned in a previous post, three of Nicholas Ackley's sons had sons named Nathaniel, so there was a period of time in the 1700s when there were three Nathaniel Ackleys living in Haddam and East Haddam, Connecticut. According to Dawes-Gates Ancestral Lines, Vol. II, "There has been much confusion relative to the three first-cousins in the third generation who bore in common the name 'Nathaniel. They were called '1st,' '2nd,' and '3rd,' in sequence of their birth." [2]


Nathaniel the 1st was born in East Haddam, Connecticut. He was the son of James and Elizabeth Ackley.  Nathaniel was the third of seven children of James and Elizabeth, and was born on November 7, 1712 [9]. Some sources report the birth year as 1711 rather than 1712, but the record below indicates 1712. It should be pointed out that the record below is a transcription of other records, so it is possible that a mistake could have been made during transcription.


Nathaniel does not appear in U.S. census records for any year. He is not listed in the first U.S. census taken in 1790; perhaps he was living with one of his children, and thus would not be listed by name. He died in 1794, so would not have been alive for the next census.

Nathaniel’s second marriage occurred late in life. At age 82, he married the widow Hannah Smith, who was 75 years old at the time. They were married on December 20, 1792 in East Haddam, Connecticut [5]. 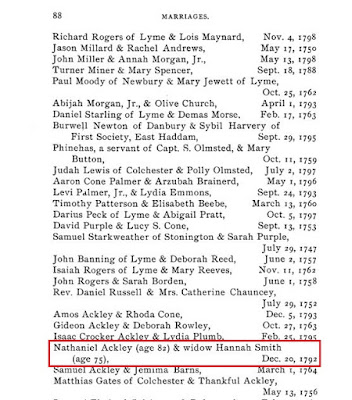 Surprisingly little else can be found about Nathaniel’s life. He died in Milllington, Connecticut on September 18, 1794 [2]. It is not known where he is buried.

Of the three Nathaniels, Nathaniel the 2nd has the least amount of documentation available.

Nathaniel the 2nd was the son of John and Rebecca Ackley, the youngest of their seven children. He was also born in East Haddam, around 1715 [2]. Nathaniel married Sarah Saxton on May 4, 1738 in Colchester, Connecticut [6].

According to various online family trees, Nathaniel and Sarah had six children: James, Elijah, Sarah, Nathaniel, Joseph, and Abraham. No reliable birth dates can be found for any of these children; therefore, their names and relationship as Nathaniel and Rebecca's children should be viewed with some skepticism. Abraham and Joseph are mentioned by name in Nathaniel's will [8].

Nathaniel the 3rd was the youngest of 10 children born to Samuel and Bethyah Ackley. He was born on June 14, 1726 in East Haddam, Connecticut [9].

Nathaniel married Lucretia Willey in East Haddam on February 16, 1756 [4]. Nathaniel and Lucreita had seven children: Lucretia, Ahira, Ithamar, Nathaniel, Hulda, Mary, and Silence. The family register below gives a record of Nathaniel and Lucretia's marriage and their children's births [4]:

Nathaniel the 3rd appeared in the 1790 U.S. Census, living in East Haddam, Connecticut [10]. Note that the census actually lists him as Nath'l Ackley 3d.

If you've been following along, you probably noticed that each of these Nathaniels also had a son named Nathaniel. Let the confusion continue for another generation!


Link of the Day

The link below is for Chronicling America, a project run by the Library of Congress. The project has digitized over 2,000 U.S. newspapers which are available on the site; there is also a directory of U.S. newspapers published from 1690 to the present.


Quote of the Day

"Only those who attempt the absurd can achieve the impossible."