Franklin Cady Ackley, Sr. (my 2nd great grandfather) was born February 1, 1841 in Akron, Ohio [1],[2]. He was the eighth of nine children born to Gibbons Ackley and Amanda Cady. Three of his siblings died in infancy or childhood; another brother died in his thirties having never married, and the surviving siblings were all women. As such, Franklin was the only descendant of Gibbons and Amanda to carry on the Ackley name. His father died when Franklin was only 10 years old.  By 1860, at age 19, Franklin was on his own, boarding with Robert Moffat and family in Akron, working as a jeweler [3]. About a year later, President Lincoln made his first call for troops to fight for the Union, issuing a proclamation to raise 75,000 troops on April 15, 1861. Franklin answered that call, joining G Company of the Ohio 19th Volunteer Infantry in May of 1861 [4]. The enlistment was only for three months; most of the first enlistments were for 100 days or three months of service because the President and many others believed that this would be a short conflict. His unit served in West Virginia under Brig. General Rosecran’s Brigade, and was involved in the Battle of Rich Mountain on July 11, 1861 in what is now West Virginia, during which Union forces engaged and defeated the Confederates in one of the first land battles of the Civil War [4]. Below is an account of the battle which appeared in Harper’s Weekly on July 27, 1861 [5].

A brilliant battle, resulting in a complete success, signalized the opening of the campaign of General McClellan in Western Virginia. It occurred on Thursday afternoon at Rich Mountain, where a force of 2000 rebels were strongly intrenched under Colonel Pegram. The official dispatch of General McClellan to the War Department, dated from Rich Mountain, states that he dispatched Brigadier-General Rosencrans, a young and able West Point officer of engineers, with four regiments of Ohio and Indiana troops, as an advance-body, through the mountains from Roaring Rum, a distance of eight miles, over which route they had to cut their way through the woods. After a march of nearly twelve hours, General Rosencrans came on the rear of the rebels, and, after a desperate fight of an hour and a half, completely routed them, driving them in the utmost disorder into the woods, and capturing all their guns, wagons, and camp equipage, or, as General McClellan says, "all they had." They also took several prisoners, many officers among them. Sixty of the rebels were killed, and a large number wounded. Of the Union troops twenty were killed and forty wounded. General McClellan had his guns mounted to command the rebel's position, but he found that the gallantry of Rosencrans spared him the trouble of going into action.

An engraving of the battle that appeared in the same issue of Harper’s is below. 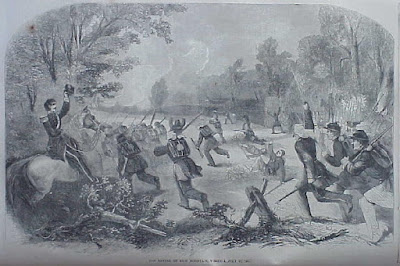 The service of this unit was recalled in an article that appeared in the Summit County Beacon on February 25, 1880 [6]. Franklin is among the soldiers mentioned in the article. In the article, General George McNeil recalls of the unit:  “...it was an important service. They pushed right into the enemy's country, licked old General Garnett, took a lot of artillery and small arms and about 2,300 rebs.” [6] 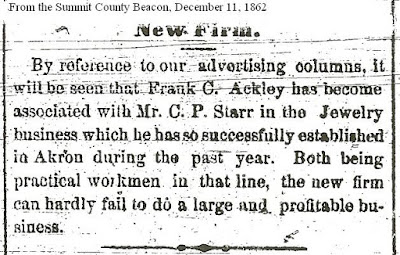 Franklin was married to Maria Jeannerette on September 9, 1863 by an Episcopal minister, the Rev. Dr. Little, in New York City [8], [22], as mentioned in the marriage announcement from the Summit County Beacon shown below. Note that Maria's name is listed as Marie Jenneret Lockwood; there will be a future post explaining my search for Maria with details on the possible reason for this discrepancy. 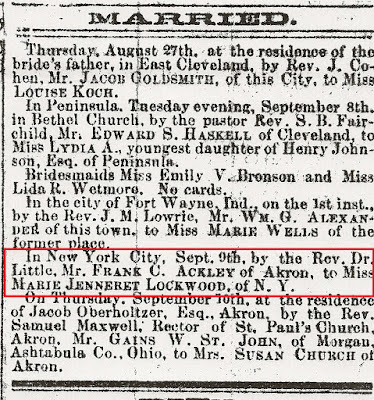 In May, 1864, Franklin enlisted again, and served with F Company of the Ohio 164th Volunteer Infantry until August of 1864 [4]. Below are the records of his muster in and muster out. 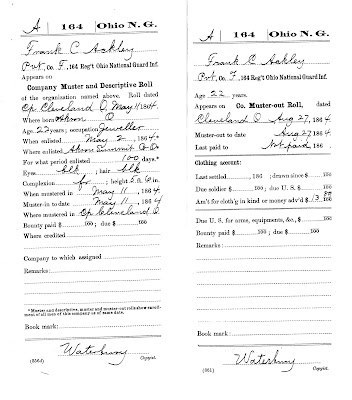 Franklin’s nephew Dwight Ackley Hibbard (the son of his sister Lucy Ann and Allen Hibbard), was in the same unit [4]. Their unit was dispatched to Washington, D. C., and was attached to 1st Brigade, DeRussy's Division, 22nd Army Corps. According to the Civil War Soldiers and Sailors System, they were assigned to duty on the south side of the Potomac as garrison at Forts Smith, Strong, Bennett, Hagerty and other Forts and Batteries until August [4]. A map of the fortifications around Washington, D.C. is shown below [9]. 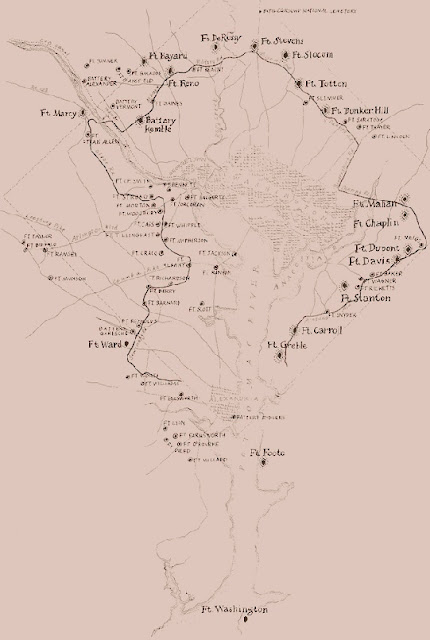 A series of articles written by a soldier from Franklin's company, Company F, published in the Summit County Beacon confirmed that the company saw duty at Fort Corcoran in Arlington, Virginia, which can be found just left of center on the map above. This soldier, who signed his articles with the initials “H.W.”, wrote:

“We are encamped in Fort Corcoran, a most lovely spot, in full view of the capital… The identical soil held by the 164th regiment was once the property of the rebel General Lee. His house with pillars in front, is of the old Virginia style: not fine in architecture, but situated in the midst of a grove on an elevation, a little more than midway up the Hights.” [21]

Fort Corcoran was built in 1861 to provide protection for the Aqueduct Bridge, which had important access to Washington, D.C. A view of the bridge from Fort Corcoran is shown below left; on the right is a photo of the rear entrance to the fort:

A sketch of the fort that appeared in Harper's is shown below.

President Lincoln addressed the 164th Regiment just before their return to Ohio [10]. The text of his speech follows:

SOLDIERS:--You are about to return to your homes and your friends, after having, as I learn, performed in camp a comparatively short term of duty in this great contest. I am greatly obliged to you, and to all who have come forward at the call of their country. I wish it might be more generally and universally understood what the country is now engaged in. We have, as all will agree, a free government, where every man has a right to be equal with every other man. In this great struggle, this form of government and every form of human right is endangered if our enemies succeed. There is more involved in this contest than is realized by every one. There is involved in this struggle, the question whether your children and my children shall enjoy the privileges we have enjoyed. I say this, in order to impress upon you, if you are not already so impressed, that no small matter should divert us from our great purpose.

There may be some inequalities in the practical application of our system. It is fair that each man shall pay taxes in exact proportion to the value of his property; but if we should wait, before collecting a tax, to adjust the taxes upon each man in exact proportion with every other man, we should never collect any tax at all. There may be mistakes made sometimes; and things may be done wrong, while the officers of the Government do all they can to prevent mistakes. But I beg of you, as citizens of this great Republic, not to let your minds be carried off from the great work we have before us. This struggle is too large for you to be diverted from it by any small matter. When you return to your homes, rise up to the height of a generation of men worthy of a free government, and we will carry out the great work we have commenced. I return to you my sincere thanks, soldiers, for the honor you have done me this afternoon.


Franklin returned to Akron after his service, and his first son, Charles Jeannerette was born there in June of 1865 [2],[8]. Later in 1865 the family moved to Saginaw, Michigan, where Franklin went into the jewelry business for himself [11]. By 1869, he had left the jewelry business, and was employed by the Western Union Telegraph Co. as manager of their Saginaw office [12]. Sometime in 1869, Franklin, Maria, and Charles moved to Jackson, Michigan, where Franklin continued as a telegraph operator [13]. Franklin and Maria’s second son, Franklin, Jr., was born in Jackson in August 1870 [8]. Shortly after Franklin Jr. was born, the family moved to Adrian, Michigan, where their third son, James Parsons, was born in June 1872 [8]. Later that year tragedy struck – Charles died of scarlet fever [14]. Franklin was also a telegraph operator in Adrian, becoming manager of the local Western Union office. The article below from the Jackson Citizen Patriot [23] reports on his move from Jackson to Adrian to take over the Western Union office in Adrian. 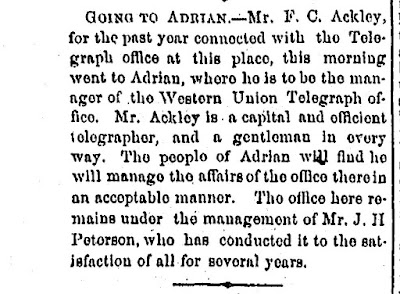 Franklin remained manager of the Western Union office for several years; Adrian city directories from 1874 and 1876 list him as manager of the office [27],[28]. The family stayed in Adrian for many years, appearing on the census there in 1880 [15]. According to the article below from the Saginaw News [24], Franklin went to work for the Mutual Union Telegraph Company in Adrian in 1881. 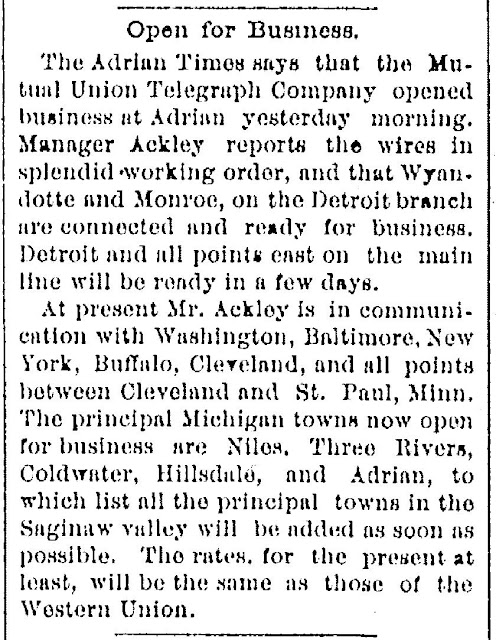 The following curious article appeared in the Jackson Citizen Patriot in 1884 [25]. This is apparently a reference to Franklin's supposed association with Mayor Thomas Navin, who was mayor of Adrian from 1881-1882. Navin was accused of forging city bonds and took off from Adrian in 1882. In 1885 Navin was arrested in New Orleans, and was found guilty and sentenced to 10 years in prison for embezzling $20,000.

In the 1885 Adrian City Directory [28], Franklin is listed as a partner with William Schoolcraft in a saloon at 31 S. Main St. in Adrian. By 1890 he became the proprietor of the Hotel Emery bar at 19 and 21 S. Main St [29]. According to the article below from the Adrian Daily Telegram, during the time that Frank was the proprietor of the Hotel Emery bar he was the unfortunate victim of a robbery during a trip to Detroit in 1895 [31]. 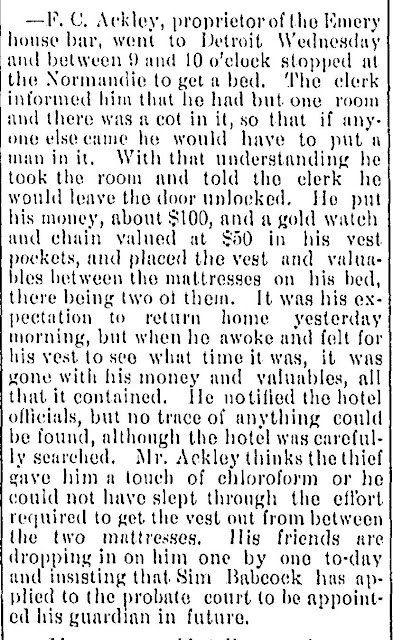 In the 1897 directory [30] Franklin is listed as the proprietor of the Hotel Emery Café at the same location. Below is a photo of the family from around 1890. 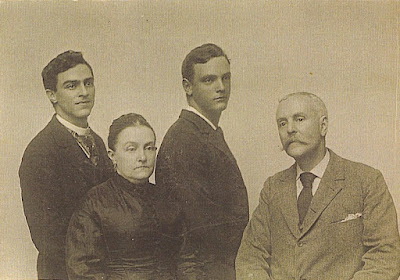 They were listed in Adrian again on a special state veteran’s census in 1894. Maria died in 1898 and was buried in Oakwood Cemetery in Adrian [16]. Franklin was listed in the 1900 census in Milwaukee, Wisconsin [17], living with his son Franklin, who moved there around 1895. It appears that Franklin, Sr. was just visiting, because he was selected to be the steward of the Adrian Elks lodge according to the article below from the  October 4, 1901 Adrian Daily Telegram [32], and  he was found living in Adrian in the 1903 Adrian City Directory [18]. 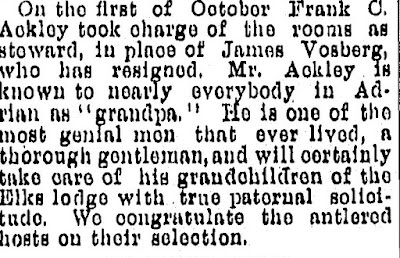 His application for a Civil War pension submitted in 1904 lists Adrian, Michigan as his home. He did move to Milwaukee shortly after that, and lived the rest of his life there. Below is a picture of Franklin with his son’s family at their Milwaukee home. 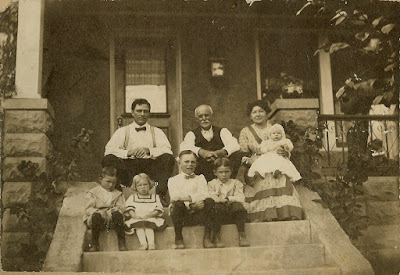 Franklin died November 27, 1918 in Wauwatosa, Wisconsin [19]. He was returned to Adrian, Michigan for burial next to his wife and son in Oakwood Cemetery. He was originally buried without a headstone, but due to his Civil War service he was eligible for a headstone from the Department of Veterans Affairs, and a marker was obtained in January of 2008. A picture of his newly installed headstone is below. His obituary from the Adrian paper follows [20]. 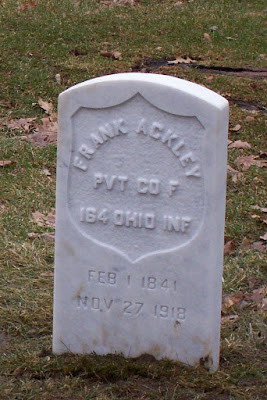 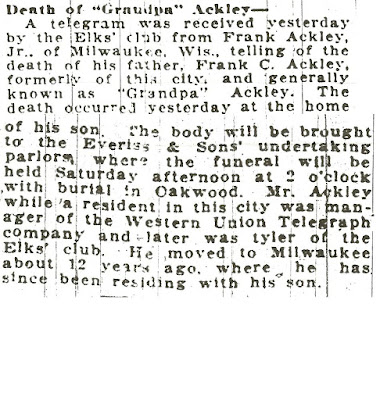 
Below is the link for the Soldiers and Sailors Database website run by the National Park Service. If you are looking for information about the Civil War service of your ancestors, this is a good place to start your research.


Quote of the Day


"Nearly all men can stand adversity, but if you want to test a man's character, give him power."