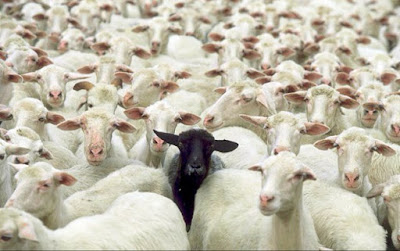 Even the best of families all seem to have that one family member that doesn't quite live up to expectations -- the so-called "black sheep" of the family. President Jimmy Carter had his brother Billy, Alec Baldwin has his brother Daniel, Bill Murray has his brother Brian, ... you get the idea.

The closest thing to a black sheep I could find in my family is my 3rd great uncle, Charles Homer Ackley, my great great grandfather's brother. Charles was born in Akron, Ohio on November 26, 1834, and died in Chicago, Illinois one day short of his 33rd birthday in 1867. The circumstances surrounding his death -- he died in a brothel after a week long bender filled with whisky and morphine -- were certainly tragic for his family when it happened, but through the lens of time it has all the makings of a black sheep story. I can't tell it any better than the newspaper did in 1867, so I offer this transcription of the story of his death as my black sheep story.

Coroner’s Inquest on the Body of C. H. Ackley, of Saginaw City – The Testimony in the Case

[From the Chicago Tribune of Tuesday]

At the inquest on the body of Charles H. Ackley, of Saginaw City, Monday the following testimony was given:

Mrs. Emma Hedges, keeper of the brothel in which Ackley died, gave the following testimony: I keep the house No. 155 Wells Street. The deceased came to my house a week ago last Friday night. He was pretty drunk, and wanted to stay all night. He stayed the next day, and until Sunday. Sunday he came to my room, and I asked if he didn’t’ want some dinner. He said he would rather have a drink of whisky. He had a bottle with him, a quart bottle, I think, and he wanted to get it filled again. I coaxed him to drink some tea. He went out riding with one of the girls. He stayed until Tuesday, when he settled up his bill and said he was going home. He had a valise, which he took with him, and went away in a hack to get some money. He then went off, and said he should be back in the city in about a month. Wednesday night he came in again. I said, “I thought you had gone, Charley,” and he said “No, I staid to see the fight.” He was very drunk. He had not had anything to eat. He was very drunk. He said he had left his money and watch in a saloon. He wanted a bottle of whisky, but I had none. He then wanted a bottle of wine, which I got. I asked him if he wouldn’t have something to eat, and then went up stairs. He staid all night and all day Thursday. Thursday I went into his room and the paper to him. He staid that night. Friday he went out to get a paper and came back. That night he said he would like to go the theatre, but he did not feel well enough. That was the last I saw of him. He staid that night. Saturday, about noon, one of the girls came up and said, “Something is the matter with Charley.” I went down and found him in a stupor. I had been told by one of the girls that a night or tow before he had had the tremens, and I was afraid that was what ailed him. I sent out for policemen. Two came, and I sent them for a doctor. I had heard Charley say something about a friend of his, so I sent for him, too. It was about half-past four when he died.

Mary De Ville, an inmate of Mrs. Hedge’s house, testified as follows: The deceased came to our house Wednesday night. He had been drinking a good deal. He staid till Saturday, and Saturday morning, before breakfast, he drank half a pint of whisky. After eating breakfast he asked me to get him some whisky and morphine. He said he was going home the next day, and that morphine always straightened his nerves. He wanted to be all straight. I went out and got a quarter of a grain of morphine. I went back and the deceased took a drink of whisky and then swallowed the morphine. This was about 12 o’clock. After taking the morphine he was immediately seized with a spasm, and turned black in the face. I went out and got him a pint of whisky on Friday night. I told him he must not drink but a little at a time, and he promised me he would not. When I awoke in the morning the bottle was empty. When he was taken with the spasm I went and called Mrs. Hedges. He died about half past four. He did not eat regularly. He was there a week and a day in all, and to my knowledge did not eat more than three times. He only went out of the house to get a drink, and then came back. He drank only tea besides whisky. He told me a good deal about his home and his brother, and said he wanted to be all straight when he got home. Wednesday night he was very drunk, and talked wild all night. The only time when he seemed straight was on Saturday morning. He seemed sober then.

The jury returned a verdict that the deceased died of congestion of the brain and lungs, superinduced by exhaustion and dissipation.

The deceased was a man of about thirty years of age, and well known in our business community. His relations, consisting of his mother and a brother, reside in Saginaw. Both of them are highly respected members of society. About a year since, the deceased entered upon a similar career of dissipation in this city, which was protracted to such a length of time that his mother came in search of him, and after much persuasion, induced him to return. In spite of his wild ways, this young man was the idol of her heart, and his death, and the manner thereof, will be a terrible blow to the afflicted parent.


This article originally appeared in the Chicago Tribune and was reprinted in the Saginaw newspaper shortly after it ran in Chicago. Unfortunately I have lost the exact reference, but it would have appeared in early December, 1867 since the death occurred 26 November 1867.

Charles was laid to rest in Glendale Cemetery in Akron, Ohio in the same plot as the rest of his family.


This Wikipedia page discusses the origins of the term "black sheep":


"You gain strength, courage, and confidence by every experience in which you really stop to look fear in the face. You must do the thing which you think you cannot do."