Some "Other" Ackley Lines

The posts up to this point have concentrated on Nicholas Ackley and his family. While many of us can trace our ancestry back to Nicholas, there are other Ackley lines that either do not have a connection to Nicholas at all or just have not been able to establish a connection yet. In many cases people researching these lines have run into the proverbial "brick wall" -- the paper trail has ended before they could trace the line back to either Nicholas Ackley or some other Ackley immigrant who came to America from somewhere else. Today's post will discuss two such lines that were brought to my attention by readers. To keep things simple, we'll only cover the earliest known ancestor from each line and their children. The idea is to introduce them and hope that other readers have either researched the lines or might have some clues.


Thanks to Donovan Ackley for bringing this line to my attention.


The progenitor of this line, Lewis Ackley, was born in Otsego County, New York on 4 July 1809 [1], and died in Noble County, Ohio on 22 Apr 1892 [1]. Lewis married Maria Grace around 1828. Maria was born 28 Oct 1807 in Pennsylvania [1], and died 19 Sep 1887 in Noble County, Ohio [1]. Lewis and Maria were both buried in Olive Cemetery in Caldwell, Ohio [1]. Since he was only 11 years old for the 1820 census, which only listed the heads of household, he would not be found by name in the 1820 or 1810 censuses. Lewis is listed as the head of his household and living in Ohio in every U.S. census from 1830 to 1880. Note about counties: Morgan County was formed in 1817 from parts of Guernsey, Muskingum, and Washington Counties; Lewis is listed as living in Morgan County in the 1830, 1840, and 1850 U.S. Federal Censuses. Noble County was formed in 1851 from parts of Guernsey, Morgan, Monroe, and Washingtion Counties; Lewis is listed as living in Noble County in the 1860, 1870, and 1880 U.S. Federal Censuses. His occupation is given as carpenter in the 1850 census, and farmer in every census after that. One interesting fact from the 1870 census -- there is a column for parentage of each person listed, and the column labelled "Father of foreign birth" is checked for Lewis. The column for his mother is not checked. However, in the 1880 census the birthplace for both of Lewis' parents is listed as New York. The censuses before 1870 did not collect information on parents' birthplaces. 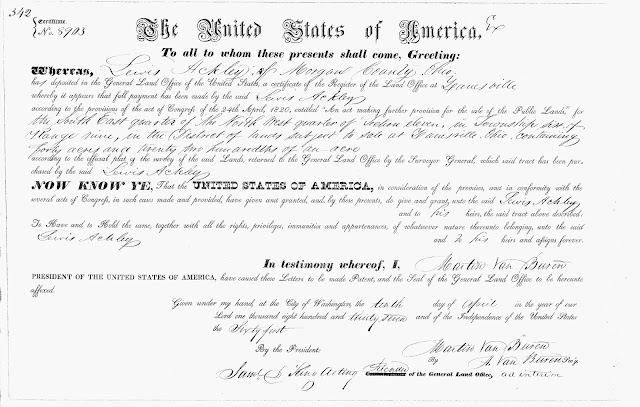 In the 1860 U.S. Federal Census Non-Population Schedule, Lewis is shown owning a farm in Noble County, Ohio with 126 acres worth $3,000. His farm implements and machinery were valued at $100. He also owned various livestock, including 4 horses, 6 milk cows, 4 working oxen, 4 other cattle, 19 sheep, and 2 swine, total value of $560. His farm also produced wheat, corn, oats, wool, peas, beans, butter, and cheese [3].

In the 1880 U.S. Federal Census Non-Population Schedule, Lewis is again shown as a farm owner in Noble County, Ohio. By this time the farm is 70 acres, and his son Columbus is listed on the line just below Lewis as a farm owner with a 30 acre farm [3].

Lewis and Maria had nine children:

Thanks to Mark Ackley for bringing this line to my attention and sending me the documents his father put together detailing his research on Daniel Ackley and his descendants. You'll see that most of the information below comes from those documents.

The earliest known ancestor for this line is Daniel. He is believed to have been born around 1760 in Little Egg Harbor, New Jersey [8]. He died about 1816 in Wilkes-Barre, Pennsylvania [8]. Daniel served in the Revolutionary War in Capt. John Phillips' Company in the Third New Jersey Regiment [8],[10]. He married Sarah Jane (Price) Parker, the widow of John Parker, in 1790 [8]. Daniel is found in tax records in Gloucester County, New Jersey in the years 1792-1797 as well as 1802 [9]. In 1810 he is found in the census for Pittstown, Luzerne County, Pennsylvania [12]. Daniel and Sarah had seven children:

Of special interest is that Joshua and Daniel are associated with the Ackley Covered Bridge that now sits in Greenfield Village in Dearborn, Michigan. Henry Ford created Greenfield Village to showcase American history, and chose the Ackley covered bridge to be part of the village. Other structures in the village include the Wright brothers bicycle shop, the Logan County, Illinois courthouse where Abraham Lincoln practiced law, and Henry Ford's birthplace. The bridge was originally built in 1832 to span Enlow's Fork (also know as Ackley Creek) of Wheeling Creek on the border of Washington and Greene Counties in Pennsylvania. The white oak timber that was used for the bridge was cut from property owned by Joshua and Daniel, and both men participated in the construction of the bridge. The bridge spanned Enlow's Fork until 1937, when it was disassembled and moved to Greenfield Village [11]. Here are some pictures from Greenfield Village (found online at www.waymarking.com): 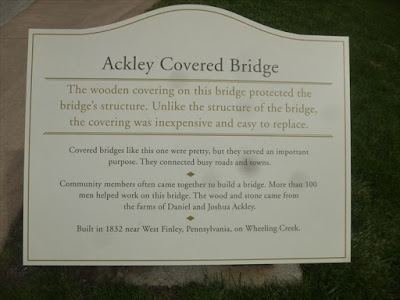 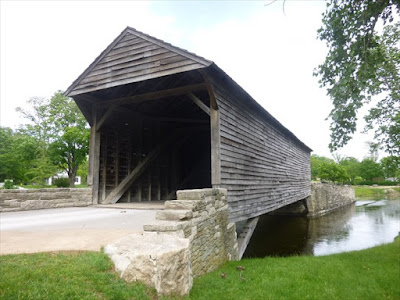 Although there is no evidence that they are related, New Jersey tax records show a John Ackley, James Ackley, Silas Ackley, Uriah Ackley, and William Ackley who all lived in Great Egg Harbor Township in New Jersey at the same time as Daniel [9]. Hezekiah, John, James, and Silas were also in the same unit as Daniel in the Revolutionary War [10].


Link of the Day

To see more on the Daniel Ackley line, use the link below. This is Mark Ackley's website; he says it needs updating but there is some interesting information and pictures there: