The final two kits from the Y-DNA recruiting effort have completed, about a month earlier than expected. For the details on the first three kits, see this post.

Kit #4 was for a known descendant of Nicholas Ackley through his son Samuel. This represents something new for the project; all current members who have a known connection to Nicholas are descendants of either his son John or his son James. The quick and dirty tree for this tester (again, leaving off the most recent generations to protect his privacy) looks like this (sorry for the small font): 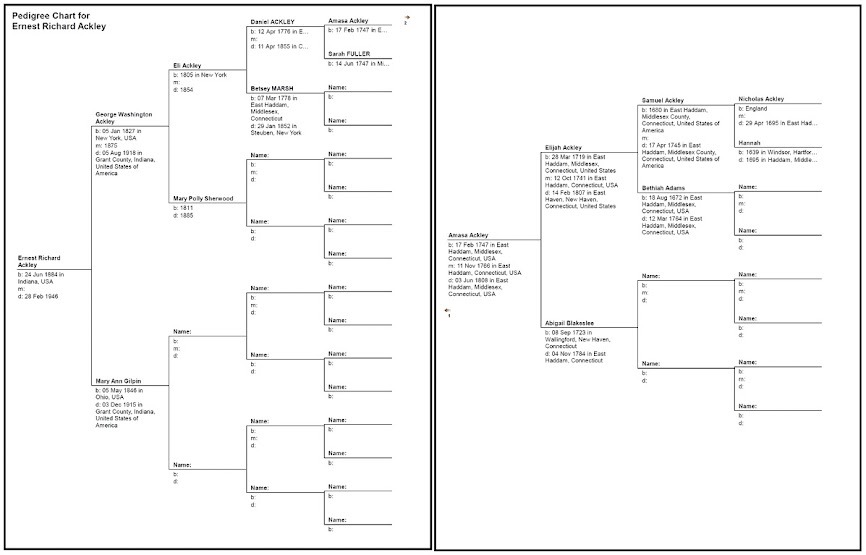 The final kit belongs to a descendant of Lewis Ackley, born in 1809 in Otsego County, New York. I wrote about the Lewis Ackley line in this post a few years ago. Here is a quick and dirty tree for this line: 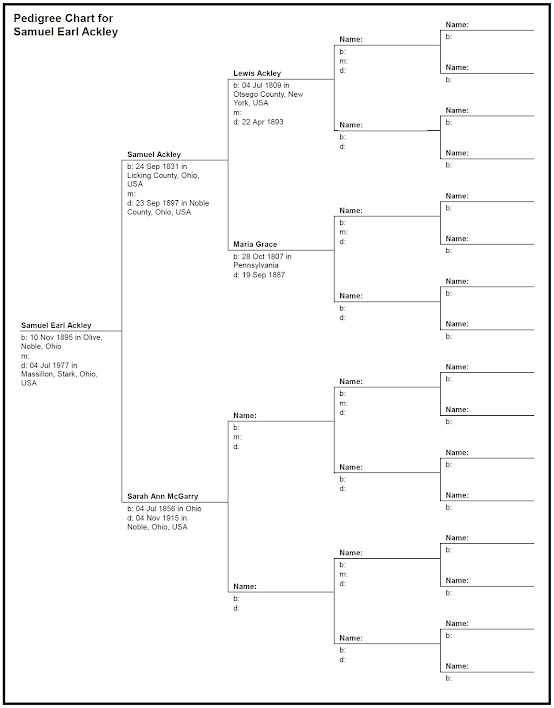 As expected, the kit from the descendant of Nicholas Ackley through his son Samuel matched all of the other known descendants of Nicholas. The fifth kit also matched every one of the known descendants of Nicholas, so he and anyone else who is a descendant of Lewis Ackley of Otsego County, New York can focus their research on finding their connection to Nicholas. Interestingly, as mentioned in part 1, one of the other new members is a descendant of another Ackley from Otsego County, James D. Ackley, born in 1799. Certainly more research is needed, but perhaps James D. and Lewis were closely related; their birth years are close enough that they could be brothers or close cousins.

The relationship between genetic distance and relatedness is summarized in the table below (same table in part 1). Since the new testers all took a Y-37 test, we will make our comparisons at the the 37 marker level.

In the table below, all of the Ackley men in the Ackley Surname Project who have done a Y-DNA test are compared to one another. Kit numbers of new testers are highlighted in green. As discussed in part 1, one of the new testers (938688) did not match any of the other men, and thus it can be assumed that he is not a descendant of Nicholas Ackley. His genetic distances to the other men were above the FTDNA reporting threshold, so they are not reported. However, since we know he does not match anyone else we can color his cells red to indicate not related.