Were Our Distant Ancestors Vikings? 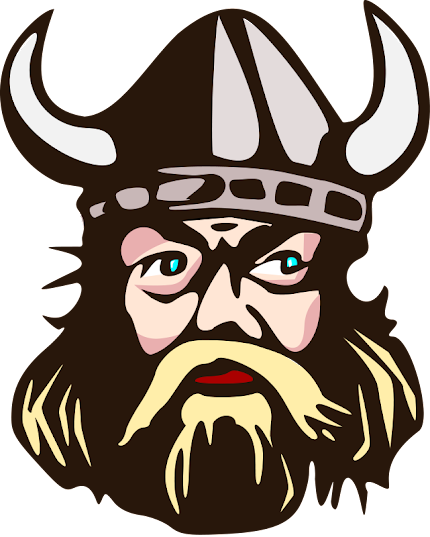 I recently ran across an interesting collection of articles about DNA analysis of skeletal remains excavated from several Viking burial sites throughout northern Europe. I first read about this analysis in DNA Explained, an excellent blog on genetic genealogy written by Roberta Estes [1]. The original study was published in Nature [2] and had 90 people listed as authors (Nature is a pay site, so if you follow the link below, you can read the abstract for free, but the full article will cost $8.99). Links to other (free) articles about the analysis can be found in Roberta's article.

The findings published in the main paper are the result of six years of research conducted on 442 skeletons found in Viking burial sites in Russia, Faroe Islands, Sweden, Denmark, Greenland, Iceland, Norway, England, Poland, Scotland, Estonia, Italy, Ukraine, and Ireland. A major part of the study involved sequencing the DNA of the remains, and in cases where the samples were high enough quality, determining the mitochondrial (mtDNA) haplogroups for all samples and the Y-DNA haplogroups for the males. Family Tree DNA was fortunate to be involved in the process and added the haplogroup data to the Y haplotree. FTDNA also shared the data with Roberta Estes so she could publish it in her blog; see the link in reference [1] below to see the full list of remains examined and details about where they were found, haplogroups, etc.

The findings from the study promise to change our ideas of what we think Vikings were all about. An article on the CNN website [3] describes it thus:

"The results change the perception of who a Viking actually was. The history books will need to be updated," said Eske Willerslev, a fellow of St John's College, Cambridge.

"We didn't know genetically what they actually looked like until now," Willerslev added.

He said the new research "debunks" the traditional image of blond Vikings, as "many had brown hair and were influenced by genetic influx from the outside of Scandinavia."

The study also revealed genetic differences between the various Viking populations within Scandinavia, which suggests different groups were more isolated than previously thought.

And the research also indicated that Viking identity wasn't something exclusive to Vikings themselves.

Two skeletons found on Orkney, off the northeast coast of Scotland, which had DNA similar to modern-day Irish and Scottish people, were buried in Viking-style graves. This suggests they may have taken on Viking identities, researchers say.

The last two points are particularly key to understanding why this study is relevant to us. First, a refresher on Y haplogroups.

I've written a couple of previous posts about Y-DNA here and here, but to save you having to go to another post, I'll give a quick summary here.

According to Family Tree DNA, "Y-chromosome DNA (Y-DNA) haplogroups are the major branches on the human paternal family tree. Each haplogroup has many subbranches known as subclades." [4]

From Family Search [5] we get the following definition of SNPs:

SNPs are defined as: “A single-nucleotide polymorphism (SNP is pronounced snip) is a DNA sequence variation occurring when a single nucleotide adenine (A), thymine (T), cytosine (C), or guanine (G) in the genome (or other shared sequence) differs between members of a species or paired chromosomes in an individual.” SNPs need to be confirmed by specific DNA SNP tests and are resolved in series of SNPs from basic Haplogrouping into the specific haplotypes or sub-types.

That's quite a mouthful; in simple terms a SNP is the change of a nucleotide value at a specific location on a chromosome from the expected value to something different. For example, the substitution of a C for a G in the nucleotide sequence AACGAT, producing the sequence AACCAT, is a SNP. The older the SNP; i.e., the further back in time the mutation occurred, the higher up in the tree it is and the older the haplogroup is. Haplogroups are defined by letters of the alphabet, and each haplogroup can trace its origin to specific geographic areas and time periods. Below is a simplified picture of the Y-DNA haplotree. Haplogroup A at the left is the oldest haplogroup, and you can see the branching nature of subsequent haplogroups.

The formation of haplogroups over time can also be viewed as the migration path of humans out of Africa into Asia and Europe. There are five men in the Ackley Surname Project who have done Y-DNA SNP testing that places them in the haplogroup R-FGC52286 (a subclade of R1b). Those who have not done SNP testing have been predicted to be in the R-M269 haplogroup (higher in the haplotree). If they did further testing, it is likely that they would end up in the R-FGC52286 group or a closely related group. The migration path for these haplogroups looks like this:

What the Study Found

The authors of the original paper published in Nature [2] summarize their findings thusly:

We find the Viking period involved gene flow into Scandinavia from the south and east. We observe genetic structure within Scandinavia, with diversity hotspots in the south and restricted gene flow within Scandinavia. We find evidence for a major influx of Danish ancestry into England; a Swedish influx into the Baltic; and Norwegian influx into Ireland, Iceland and Greenland. Additionally, we see substantial ancestry from elsewhere in Europe entering Scandinavia during the Viking Age. Our ancient DNA analysis also revealed that a Viking expedition included close family members. By comparing with modern populations, we find that pigmentation-associated loci have undergone strong population differentiation during the past millennium... We conclude that the Viking diaspora was characterized by substantial transregional engagement: distinct populations influenced the genomic makeup of different regions of Europe, and Scandinavia experienced increased contact with the rest of the continent.

In short, the presence of various Y-DNA haplogroups found at the Viking burial sites showed that not only did Vikings move into other parts of Europe during the Viking Age (which we already knew), but it seems they brought people back to Scandinavia with them. There was "restricted gene flow" within Scandinavia, which to me implies they tended to leave each other alone and instead looked westward to expand their spheres of influence. It even seems that they stayed out of each others' way in their conquests, with each group sticking to pretty specific locations on their raids.

The Y-DNA data used to support these conclusions was provided in detail in Roberta Estes' article [1]. Of the roughly 300 males in the study, 285 had high enough quality DNA samples to obtain Y haplogroup results. I have summarized the data by major haplogroup in the table below: 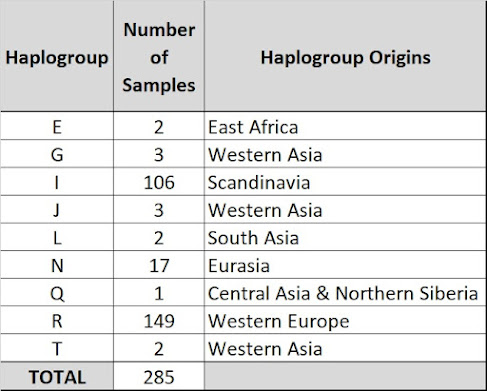 Note that the I haplogroup, a predominantly Scandinavian haplogroup, had a high frequency in the study as expected. While some of the subclades of the R haplogroup are thought to have formed in Scandinavia, most of them are thought to be prevalent in Western Europe, including the British Isles. So, the high frequency of R haplogroup samples led to some of the conclusions about movement of Western Europeans into Scandinavia mentioned above. Another interesting conclusion coming from the presence of R subclades in some of the Viking burial sites was that "... comparing DNA and archaeology at individual sites suggests that for some in the Viking bands, 'Viking' was a job description, not a matter of heredity." [8] As we will see next, this idea is key to the relevance of this study to Ackleys.

Why This Is Relevant to Ackleys

Regarding the concept of Viking as a job description rather than heredity, the study found that "Viking-style graves excavated on the United Kingdom’s Orkney islands contained individuals with no Scandinavian DNA, whereas some people buried in Scandinavia had Irish and Scottish parents." [8] One of the samples found in Orkeny, VK203, is of particular interest to us. This set of remains was found at a Viking burial site known as Brough Road Birsay. See below for a map of the Orkney Islands (part of Scotland) relative to the British Isles as well as a close-up map of the island where the site is located.


VK203's age is estimated to be Viking 10th century and his Y-DNA haplogroup is R-BY10450. This is the interesting part for us; as mentioned above, there are five Ackley men in the Ackley Surname Project who have done SNP testing that puts them in the R-FGC52286 subclade. This subclade is just a few short steps below R-BY10450 in the Y haplotree:

A word about how the relationships in the haplotree work before discussing the implications of this information. All of the subclades below a particular haplogroup share a common ancestor at some point in time; the separation between the subclades (actually the number of mutations) determines how distant the relationship is. The rule of thumb is that mutations happen at the rate of about once every 144 years. The SNP Tracker application discussed above uses this concept to provide age estimates for SNPs [7]; a portion of the table for R-FGC52286 is given below:

Note that haplogroup R-M269 that was discussed above was formed about 13,000 years ago, and all of the haplogroups below R-M269 have common ancestors about that number of years ago. Dropping down to the bottom of the table, R-BY10450 (the haplogroup of our Viking), was formed much more recently, about 3,400 years ago, and R-FGC52286 was even more recent, about 1,500 years ago. While those numbers are not "close" in terms of being useful for genealogical purposes, they are relatively close in the grand scheme of things.

One other important thing to note -- haplogroup R-BY10450 is not considered a Scandinavian or "Viking" haplogroup. I wrote a post discussing the origins of our haplogroup about 4 years ago. At the time, SNP testing had established that one of our members was in haplogroup R-S1051 (see it in the table above, 2 steps above R-BY10450), and the project administrator of the R-S1051 haplogroup project stated that he thought the group had its origins in Scotland and that the group was part of the Pictish culture that lived in eastern and northern Scotland during the Iron Age. This would definitely put our VK203 Viking in the group of individuals with no Scandinavian DNA. So, he could have been one of those men for which "'Viking' was a job description, not a matter of heredity." [8] Although our distant cousin wasn't a Viking by blood, he appeared to have lived a Viking life.

This is a link to a summary of the study in Science Daily: "World's largest DNA sequencing of Viking skeletons reveals they weren't all Scandinavian"

"Your time is limited, so don't waste it living someone else's life. Don't be trapped by dogma – which is living with the results of other people's thinking."

3. Clarke-Ezzidio, Harry. " Vikings weren't necessarily blond. Or Scandinavian. Why everything you thought you knew about the Norsemen may be wrong", Cable News Network (CNN), 16 September 2020.

7. Spencer, Rob. "SNP Tracker", a tool on the website Tracking Back: a website for the exploration of genetic genealogy and population genetics, accessed online 2 Oct 2020.