If you've been keeping up with the recent posts on the Ackley Surname Project Y-DNA recruiting effort (part 1 here and part 2 here), you know that one of our new Ackley testers did not match the other Ackley men in the project, and we have reason to think he may be connected to the Eckler-Ackler-Ackley line. He has recruited a couple of other Ackley men from the Eckler-Ackler-Ackley line to join the project and test, so I wanted to give some background on this family.

As mentioned in a previous post, based on his test results there is reason to believe that our new project member is related to A. Ross Eckler, who literally wrote the book on this line -- "The Eckler-Ackler-Ackley Family" [1]. The book seems to be pretty comprehensive; Mr. Eckler collected information for the book for over 25 years and interviewed or corresponded with over 100 Eckler descendants.

A. Ross Eckler earned a PhD in mathematical statistics from Princeton and was employed at Bell Labs working on statistical and probabilistic problems in military research and development. Genealogy must have been in his blood -- his father, A. Ross Eckler, Sr., was Director of the Bureau of the Census.

The book will be used as the main source of information for this post, and will be referred to as the book in the rest of this post to keep things simple.

Johan Hendrick Eckler (some sources call him Hendrick or Henrich) was born on 16 October 1711, most likely in Germany. According to the book, family legend stated that the family originated in Holland, but A. Ross Eckler refutes that idea with several facts, including that baptismal entries in the family bible were written in German rather than Dutch, that the name Eckler is definitely of German derivation (it means "lives on a small corner"), and that the surname is unknown in Holland.

Johan Hendrick Eckler arrived in America in 1732. He can be found in the "List of Foreigners Imported in the Ship Judith, of London, Robert Turpin, Master, from Rotterdam, Qualified Sept. 25, 1732" [2]. He arrived in Philadelphia on that date and signed the oath to the Crown of Great Britain and the Province of Pennsylvania required at the time (remember, this was 1732, before the American Revolution). 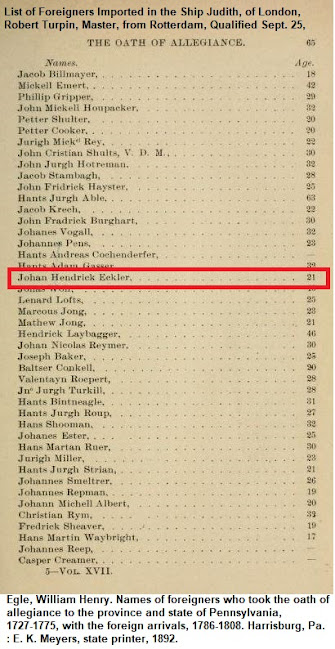 Hendrick settled in Canajoharie, a small town in the Mowhawk River Valley in New York between Albany and Syracuse. It was there that he married Margaret Young (also spelled Jung) in 1738.

Hendrick and Margaret had 10 children. They were:

Hendrick was naturalized in 1761 as noted in this excerpt from New York state laws [3]:

Hendrick was a sergeant in Captain Jacob Klock's militia company, and apparently served in the French and Indian War. According to the book, the company responded to an Indian raid at German Flats in 1763.

Where Did Ackler and Ackley Come From?

In the book, an Ackley descendant of Hendrick Eckler remarked that "Eckler was the German spelling, Ackler the English spelling, and Ackley the Yankee spelling." [1] Although this seems more like a clever attempt to explain the different spellings than a statement of fact, the fact is that within a couple of generations all three spellings were being used by the descendants of Hendrick Eckler.

Hendrick's youngest child Leonard was one of the first Ecklers to change the spelling of his surname to Ackler. According to the book, Leonard's surname was usually spelled Ackler in church and town records, but it is not clear if this was intentional or started as a mistake that got perpetuated. In any case, all of Leonard's descendants used the Ackler spelling, and it is even recorded as such in Hendrick Eckler's family Bible.

The Ackler spelling was also adopted by Peter, son of John Eckler and grandson of Hendrick, and all of his descendants.

The first Hendrick Eckler descendant to adopt the Ackley surname was John Eckler, brother of Peter Eckler just mentioned above. The story of how this came about is quite interesting. Around 1795, William and George Smedley came to the area to collect livestock from the farmers to sell in the east. They made their headquarters at their uncle Capt. Henry Eckler's house, and hired John and Henry Eckler, sons of Capt. Eckler's brother John, to help them. The father John was known to be hard on his boys and was expecting them join him in his tailoring business, so there were some hard feelings between John and his sons. The Smedleys hired John and Henry for two or three years running, and at some point the boys decided to make their home with the Smedleys and returned home with them after one of the livestock drives. John would end up living with William Smedley, and it was during this time that he changed the spelling of his surname from Eckler to Ackley. [1] Although it is not known for sure, there is some conjecture in the book that John's brother Henry also changed his surname to Ackley.

This line will be revisited in future posts as test results are received and more is learned about the descendants of Hendrick Eckler.

Link of the Week

This is a link to "The Eckler-Ackler-Ackley Family" on Family Search:

3. State of New York. The colonial laws of New York from the year 1664 to the revolution, including the charters to the Duke of York, the commission and instructions to colonial governors, the Dukes laws, the laws of the Donagan and Leisler assemblies, the charters of Albany and New York and the acts of the colonial legislatures from 1691 to 1775 inclusive. Albany, New York: J. B. Lyon, state printer, 1894.